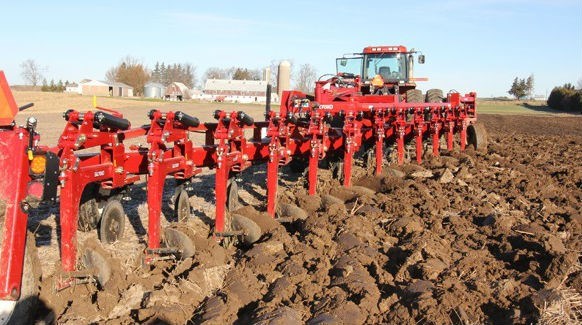 Using hydraulic variable-width technology, the 8300 Tandem Flex-Trail Moldboard Plow quickly adapts to a wide range of soil moisture and residue conditions. New hydraulic technology has allowed the 8300 to stretch up to 16 bottoms, and because it can adjust from 22-inch furrow width to 12-inch furrow in a few seconds, this large plow is still capable of narrow road transport. The 8312 12-furrow model will work around 22 feet of ground at its widest and can still transport behind the tractor at less than 12 feet wide. The 8300 also takes Salford’s tandem flex-trail technology a step further to make the 8316 Salford’s largest, yet one of its most maneuverable, plows. The 8300 incorporates the flexibility of Salford’s 8200 Tandem Flex-Trail Plow, which allows these machines to flex in their center, up and down, left to right, and, with a limited range, to twist side to side. In addition to this industry-leading flex-trail design, the 8300’s new hydraulic steering system maneuvers the plow from its center point for tighter turns and even more accurate tillage around obstacles and over contours in the field. Beyond the new features of the 8300 model, Salford has made several improvements to its overall plow shank that were released in the fall of 2013. Salford’s new plow shanks are a more durable design, and more than half of the grease fittings on the machine have been replaced by high-wear bushings for faster, easier maintenance. Also, a re-engineered trip mechanism gives Salford’s new plow shank increased trip pressure helping to hold the shank in hard ground. The new trip geometry has improved re-entry force after the shank has tripped.